Well, I found Lori.  The whole disappearance was just an act (not exactly shocking news, is it?) Lori, it turns out wanted to see which of us could find her first.  I wanted to tell her that I was the only one who had been physically looking for her.  But she kept calling me by the  wrong name, so I left it alone. 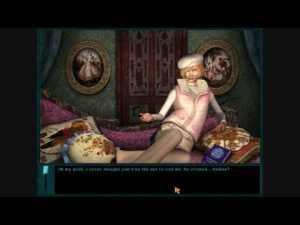 Anyway a  reward, she gave me a letter that Jake Hurley wrote to his niece, before he disappeared.  Jake had apparently gone a little squirrely, and so his niece thought the letter was full of ramblings of a crazy man.  She threw it in the trash, where, amazingly it remained until Lori (or so she says) found it.

So now using the letter as a guide.  I’m off to solve puzzles on this train, and believe me there are a lot.  Bess and George have offered to help in anyway.  I think it’s because George wants an excuse to get out of having to help Bess paint her bedroom.

So here I go with the puzzles.  Think I’ll start with this one.